Abnormalities of the uterus can cause infertility by interfering with embryo implantation and fetal growth. Uterine factor infertility is relatively uncommon occurring in less than 5 percent of women.

At Footsteps to Fertility Centre, we have been helping women with uterine abnormalities bring home healthy babies. Our fertility center is home to experienced and compassionate physicians.

Sometimes, an abnormality of the uterus happens before birth. Like other organs in the body, a woman’s reproductive organs form with she is still a fetus inside her mother’s uterus.

These malformations are called mullerian anomalies. There are many types of mullerian anomalies, including failure for the uterus or tubes to form (agenesis), a complete duplication of the uterus, cervix, and vagina (didelphys), two uteri sharing a single cervix and vagina (bicornuate), a single uterus with a fibrous band going down the center of the uterus (septate), and normal uterus with an incidental dent in it (arcuate).

The inner part of uterus where the embryo implants is called the endometrial cavity, which is surrounded by the muscle layer of the uterus.

If there are problems associated with the uterus or the endometrial cavity such as congenital anomalies, scar tissue, endometrial polyps or fibroids, implantation may be compromised.

If there is a pathology associated with the uterus, it needs to be treated and the uterine cavity assessed prior to starting infertility treatment.

Uterine abnormalities interfere with egg fertilization or embryo development and often include: 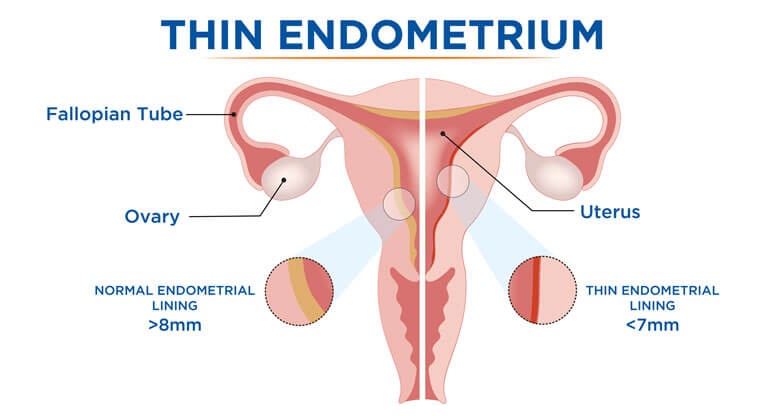 The endometrial lining is routinely measured using vaginal ultrasound in IVF cycles and is expected to be of adequate thickness for embryo implantation.

An endometrial thickness of 8 mm or greater is generally considered adequate thickness and less than 7 mm has been associated with lower pregnancy rates, with almost no pregnancies observed with a lining less than 5 mm.

Poor endometrial lining most commonly occurs in women with a history of unexplained recurrent IVF failures or early recurrent miscarriages.

The poor endometrial lining is attributable to the following factors:

During an IVF cycle, when the endometrial lining is observed, additional estrogen in the form of vaginal suppositories may improve the overall endometrial thickness and outcome.

Some investigators have used baby aspirin to improve the outcome, but results have been quite variable and most likely there is no benefit.

Sildenafil (Viagra) is a commonly used drug for erections problems in males and has been shown to increase penile blood flow. Investigators have used Viagra to increase the blood flow to the uterus with the hope of delivering more estrogen hormone to the uterine lining.

Viagra vaginal suppositories can be used to achieve this goal in IVF cycles, in which the endometrial lining is thin despite additional vaginal estrogen treatment. In most cases of thin lining, the underlying cause can be identified and treated without the need for additional intervention.

If women are grappling with issues related to pregnancy, like being unable to get pregnant or having difficulty in holding pregnancy, they must get their estrogen level and thickness of Endometrium checked.

Uterine Lining must be at least 8 mm thick for successful implantation of the fetus. If it is thin, implantation does not take place which culminates in the failure of pregnancy. Hence one needs to get treatment for thin endometrium to become pregnant. 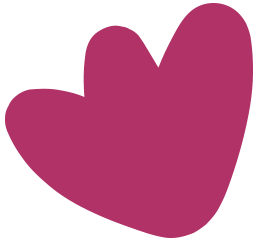 Endometrial polyps are a common cause of abnormal uterine bleeding in women of all ages. An endometrial polyp is a growth found within the uterine cavity. It is different from a uterine fibroid (leiomyoma).

Fibroids originate from the uterine musculature and therefore can occur in any part of the uterus—inside (submucous), outside (subserous) or in the wall (intramural).

Endometrial polyps are more common after menopause, although younger women may also be affected.

Although the exact cause of endometrial polyps is unknown, they may be linked to hormones and estrogen production.

Other factors that may affect the growth of endometrial polyps may include:

Endometrial polyps can have an adverse effect on fertility and fertility treatment outcomes. Polyps may create an inflammatory reaction inside the uterine cavity or cause irregular bleeding at the time of implantation.

These effects create a hostile environment for the implanting embryo and possibly prevent pregnancy or potentially cause miscarriages. It is still not well understood whether polyps cause infertility or recurrent pregnancy loss.

In some cases, endometrial polyps that are small and cause no symptoms may not be treated at all.

Your doctor may just monitor the size of the polyps over time. Other cases may be treated with hormonal medications that may shrink the polyps and lessen symptoms.

Polyps that continue to grow and cause symptoms are often removed through surgery.

The best method to remove polyps is hysteroscopy because the entire endometrial cavity can be surveyed and all polyps removed completely.

The hysteroscope is an instrument that allows us to look directly into the uterine cavity and operate at the same time.

At the tip of the hysteroscope is a wire loop that allows us to cut away endometrial polyps, remove them and send them for analysis.

There appear to be 2 proven ways to reduce the likelihood of polyp recurrence—the insertion of a Mirena IUD and endomyometrial resection (EMR).

The Mirena IUD is an excellent choice for women who wish to preserve their childbearing options. Endomyometrial resection may be a preferred method of preventing recurrence in selected women with endometrial polyps. It is also possible to perform a partial endometrial resection for appropriate candidates.

The removal of endometrial polyps can improve fertility outcomes by spontaneous conception, intrauterine insemination (IUI) and by in vitro fertilization (IVF). 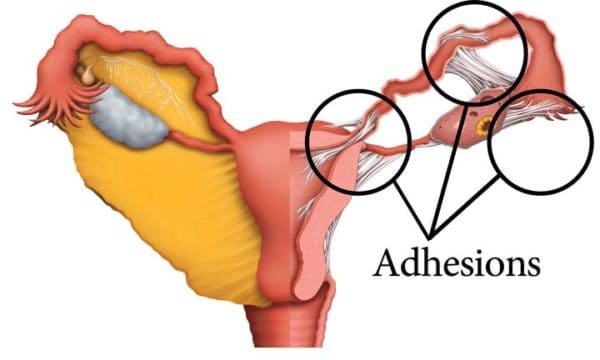 Intrauterine adhesions (IUA) or formerly known as Asherman’s syndrome is a condition characterized by the presence of adhesions or scar tissue in the endometrium.

When the endometrium is scarred and injured, amenorrhea (cessation of menstruation), recurrent pregnancy loss and infertility may follow.

IUA can result from post-partum or post-abortion inflammation of the uterine lining, but it can also occur following uterine surgery such as removal of polyps and fibroids (myomectomy) resected abdominally or hysteroscopically. A severe pelvic infection unrelated to surgery may also lead to Asherman syndrome.

Intrauterine adhesions can also form after infection with tuberculosis or schistosomiasis. Uterine complications related to these infections are less common. Whether you are trying to improve your fertility, our compassionate fertility specialist will be able to advise and help you.

The adhesions may cause amenorrhea (lack of menstrual periods), repeated miscarriages, and infertility.

However, such symptoms could be related to several conditions. They are more likely to indicate Asherman syndrome if they occur suddenly after a dilation and curettage – dilation of the cervix and surgical removal of part of the lining of the uterus and/or contents of the uterus by scraping and scooping or other uterine surgery.

The degree of IUA significantly impacts clinical and pregnancy outcomes.

Severe cases may result in a reduction in the days and the amount of menstrual blood flow and can be closely related with repeated pregnancy loss and infertility.

Mild cases may even go unrecognized for a long time or until pregnancy is desired.

Additionally, IUA may block the junction where the uterus connects with the fallopian tubes (internal tubal ostia). In such cases, embryo implantation may be compromised and the pregnancy may implant in the fallopian tube, resulting in an ectopic pregnancy.

A pelvic exam does not reveal problems in most cases. Tests may include:

Treatment involves surgery to cut and remove the adhesions or scar tissue. This can most often be done with hysteroscopy, which uses small instruments and a camera placed into the uterus through the cervix.

After scar tissue is removed, the uterine cavity must be kept open while it heals to prevent adhesions from returning. Your health care provider may place a small balloon inside the uterus for several days in the hope of preventing the recurrence of adhesion formation. You may also need to take estrogen while the uterine lining heals.

You may need to take antibiotics if there is an infection.

In some cases, the endometrial lining may be relatively thin following hysteroscopic treatment of IUA. Additional estrogen administered vaginally along with vaginal Viagra treatment may help improve the thickness of the inner lining of the uterus. 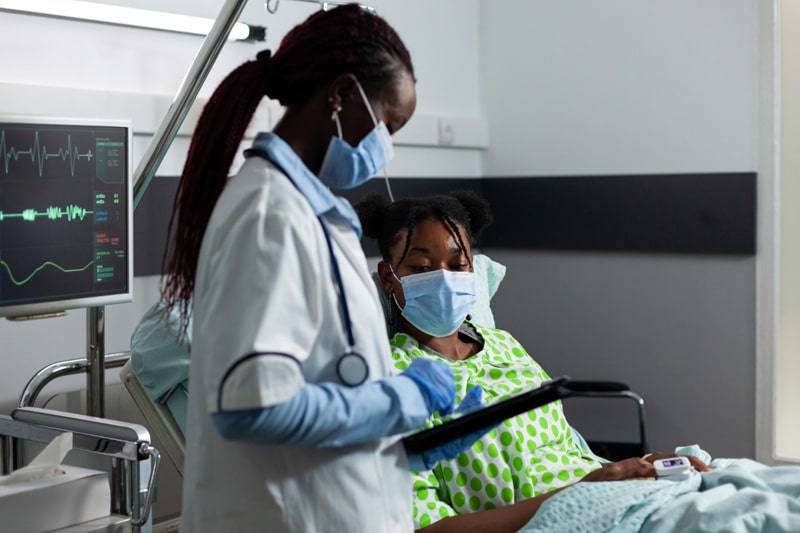 Impaired immune response in some women may result in ineffective removal of the endometrial cells from the pelvic area which may result in endometriosis.

A number of substances are involved in the pathophysiology of the disease including cytokines and natural killer cells.

The natural conception rate for healthy ovulating women in their early 30s (without endometriosis) is approximately 15-20% per month and 75-85% per year of actively attempting to conceive.

Conversely, the conception rate for women of a comparable age who have minimal or mild pelvic endometriosis (Stage I or II disease) is about 3-5% per month and 20-30% after 2 years of trying. The reduced conception rate in women with endometriosis may be explained by either decreased egg reserve (resulting in chromosomally abnormal embryos) or Immunologic implantation failure.

Whether you are trying to improve your health, improve fertility, strengthen immunity, or are looking for fertility care in Kenya, our compassionate fertility specialist will be able to advise and help you.

Some women with endometriosis have anti-phospholipid antibodies (APA) in their circulation. Also, approximately one-third of women who have endometriosis (regardless of severity) show evidence of increased Natural Killer Cell activity (NKa) in the peripheral blood and potentially in their endometrial linings. In such cases, there is a higher likelihood of early or later immunologic implantation failure.

Selective immunomodulation with steroids along with heparin and aspirin and/or Intravenous Immunoglobulin G (IVIG) or Intralipid may effectively counter immunologic implantation failure and may lead to successful pregnancies in women who have APA and/or increased NK cell cytotoxicity.

Oral steroid treatment along with aspirin and heparin use may be helpful in women with antiphospholipid syndrome and decrease the risk of having a miscarriage.

Emphasis has been on the uterine lining without paying too much attention to the most important and determining variable in pregnancy outcome, which is the chromosomal makeup of the embryo.

Based on the most recent genetic test available for chromosome testing of embryos called CGH, pregnancy rates are significantly increased and the risk of miscarriage is significantly decreased when CGH-normal (chromosomally normal) embryos are transferred into the uterus.

Women with endometriosis may have an inflammatory reaction in the pelvis that may result in the release of toxic substances and activation of specific white cells.

These toxins may reduce the natural fertilization potential of the sperm as well as the egg.

In vitro fertilization (IVF) treatment involves aspirating the eggs before they are released from the ovary during the process of ovulation and prevents exposure to endometriosis-related toxins. It is possible that once the eggs are released into the pelvis they are exposed to various toxins and inflammatory cells and this may be the case for sperm as well.

Feel free to contact us, chat with us or directly reserve an appointment below. We are more than happy to walk with you through your journey.